From 2nd-4th September, the gates of Zandvoort racing circuit in The Netherlands opened, and more than 300,000 racing fans flooded into the track for the 2022 Dutch Formula 1 Grand Prix. As one of the best-known Dutch brands, it was an opportunity not to be missed for Daelmans Stroopwafels, a firm favorite not only amongst fans but the drivers themselves.

During the three-day event, more than 7.000 Stroopwafels were baked on-site by the Daelmans Master Bakers, offering a sweet treat for the racing teams as they entered the Paddock, as well as for fans in the Founder’s Lounge. There was one fan in particular who had been waiting for the opportunity to once again enjoy fresh baked Stroopwafels, that fan was McLaren racing driver Daniel Ricciardo. 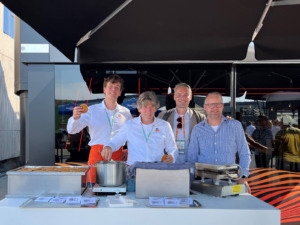 Of course, Daniel Ricciardo was not the only famous name to stop by for a Stroopwafel, with pictures of freshly baked Stroopwafels appearing across social media from the Alfa Romeo racing team to Victoria Verstappen, the sister of the F1 Champion Max Verstappen.

Jeroen Daelmans  from Daelmans Stroopwafels commented: “We are so proud to have one of the key races in the Formula 1 calendar in our home country. Therefore, when we were once again given the opportunity to be a part of the action, we couldn’t resist! It was fantastic to see the smiling faces when people saw the Daelmans Stroopwafels bakers as they entered the Paddock, and even better to see the amazing rection across social media.”

Even the team at Formula 1 themselves took up the Stroopwafel rolling challenge, rolling a Stroopwafel from the top, all the way to the bottom, of Zandvoort’s famous banking on track.

Jeroen continued: “We are proud to be part of such a fantastic event and look forward to next year.”

No products in the cart. 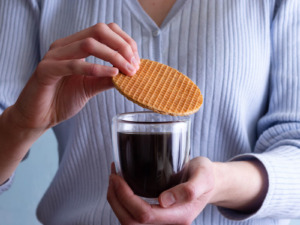 We use cookies on our website to give you the most relevant experience by remembering your preferences and repeat visits. By clicking “Accept All”, you consent to the use of ALL the cookies.
Cookie settingsAccept All
Manage consent

This website uses cookies to improve your experience while you navigate through the website. Out of these, the cookies that are categorized as necessary are stored on your browser as they are essential for the working of basic functionalities of the website. We also use third-party cookies that help us analyze and understand how you use this website. These cookies will be stored in your browser only with your consent. You also have the option to opt-out of these cookies. But opting out of some of these cookies may affect your browsing experience.
Necessary Altijd ingeschakeld
Necessary cookies are absolutely essential for the website to function properly. This category only includes cookies that ensures basic functionalities and security features of the website. These cookies do not store any personal information.
Functional
Functional cookies help to perform certain functionalities like sharing the content of the website on social media platforms, collect feedbacks, and other third-party features.
Performance
Performance cookies are used to understand and analyze the key performance indexes of the website which helps in delivering a better user experience for the visitors.
Analytics
Analytical cookies are used to understand how visitors interact with the website. These cookies help provide information on metrics the number of visitors, bounce rate, traffic source, etc.
Advertisement
Advertisement cookies are used to provide visitors with relevant ads and marketing campaigns. These cookies track visitors across websites and collect information to provide customized ads.
Others
Other uncategorized cookies are those that are being analyzed and have not been classified into a category as yet.
OPSLAAN & ACCEPTEREN
Aangedreven door